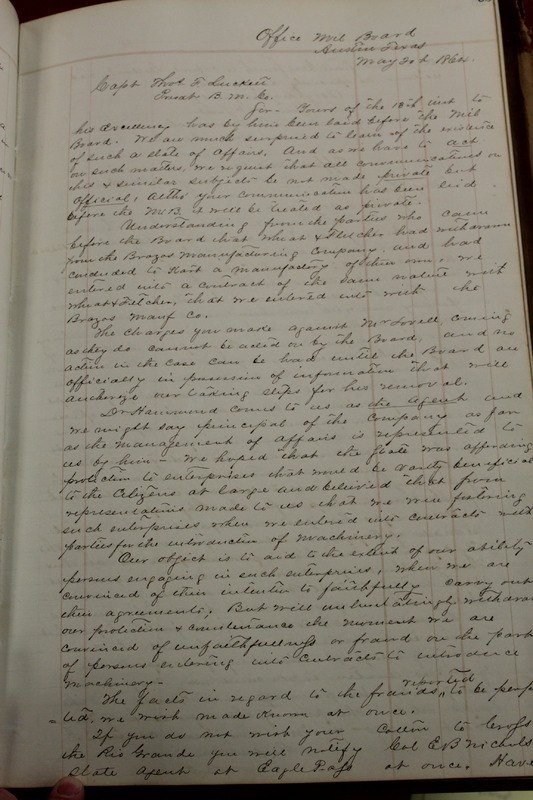 The Military Board writes to Luckett concerning some reports the latter has made about the activities of two men named Wheat and Fletcher, formerly of the Brazos Manufacturing Company.

Records of the Military Board of Texas, Texas State Library and Archives Commission, Box 2-1/318

This item is believed to be in the public domain. No copyright in the item is asserted or implied by its publication here.

Sir, Yours of the 18th inst to his Excellency has by him been laid before the Mil. Board. We are much surprised to learn of the existence of such a state of affairs. And as we have to act on such matters, we request that all communications on this & similar subjects be not made private but official. Altho' your communication has been laid before the M. B. it will be treated as private.

The charges you make against Mr. Lovett, coming as they do, cannot be acted on by the Board, and no action in the case can be had until the Board are officially in possession of information that will authorize our taking steps for his removal.

Dr. Hammond comes to us as the agent and we might say principal of the company as far as the management of affairs is represented to us by him. We hoped that the State was affording protection to enterprises that would be vastly beneficial to the citizens at large and believed that from representations made to us that we were fostering such enterprises when we entered into contracts with parties for the introduction of machinery.

Our object is to aid to the extent of our ability persons engaging in such enterprises, when we are convinced of their intention to faithfully carry out their agreements; but will unhesitatingly withdraw our protection & countenance the moment we are convinced of unfaithfulness or fraud on the part of persons entering into contracts to introduce machinery.

The facts in regard to the frauds reported to be perpetrated, we wish made known at once. [...]