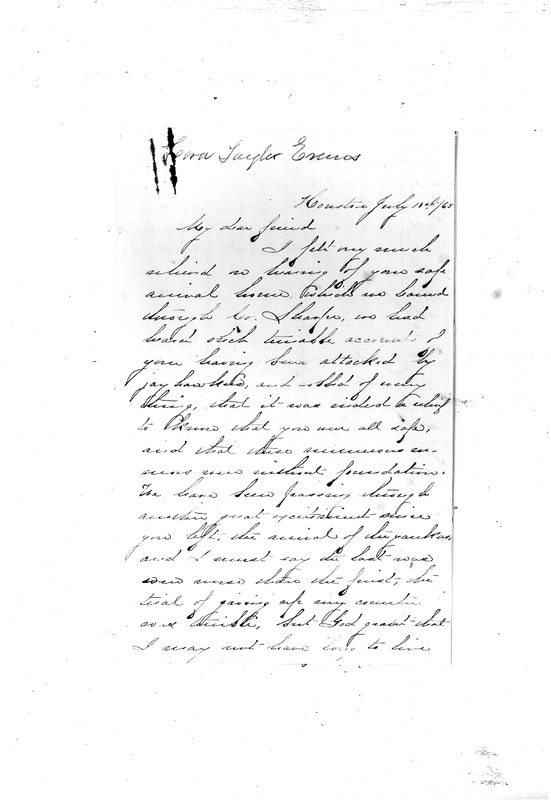 Evans writes from Houston expressing relief that the Averys had arrived back in Louisiana safely. She also discusses the effects of emancipation in Houston since the Averys left, mentioning her frustration and surprise with the ways that former slaves have behaved. News of some Houstonians who have left the city for Mexico or Europe is also included.

This item is published solely for personal research and nonprofit educational use under the terms of fair use. No copyright in the item is asserted or implied by its publication here.

I felt very much relieved on hearing of your safe arrival home, which we learned through Col. Sharpe, who had heard such terrible accounts of your having been attacked by jayhawkers, and robbed of everything, that it was indeed a relief to know that you were all safe, and that these [vicious?] rumors were without foundation. We have been passing through another great excitement since you left, the arrival of the yankees, and I must say the last was even worse than the first. The trial of giving up my [courting?] was terrible, but God grant that I may not have long to live under their detested rule, with free negroes. This is the greatest trial after all. By the bye, I must tell you how my sable damsel berated me, the third day after the arrival of the yankees (who are quartered in the Court House). She declared her independence, by forsaking me, about ten o'clock at night, and fleeing to one of their Lieut's for protection. My surprise is better imagined than described, when I came in from the gallery, where we were sitting, to find that [Anne?] and Clara had both decamped, and strange to say had moved out all of their things, and we had not heard them. They are living together and keeping a Yankee boarding house. I am forced to believe that Clara would not have left me in the way she did, if she had not been influenced by [Anne?]. I can get along much better without her than I am supposed I could, but poor little Henry, it was a great trial for him to give her up. He cried for several days whenever he would think of her. He has seen her twice since she left, she gave him some watermelon, and he told her to take it, he would not eat what free negroes ate. Henry told me yesterday that he wanted to write to Sadie, and tell her how Clara had treated him, but he says she is not as much to blame as the yankees. He talks constantly of dear little Sadie, and does not forget her in his association with other children. Dr. & Mrs. Evans leave next week for New York, on their way to Europe. I have given them the picture of Henry and Sadie, and they will have photographs taken in New York and sent to me. They have sold their place on Main street together with some vacant lots, and will never return here again to live. I look upon them as fortunate people. I only wish that Pa could leave. A large number of our citizens are going on to spend the summer. Mrs. Shirley has left, also Mrs. [Herriot?], many others are only waiting until there are finer steamers on the route.

Col. Ward was here for a few days, but has gone, or rather started for New Orleans. I hear that he is waiting in Galveston for a steamer. I was greatly shocked the other day when the news of Hattie McFarland's death reached us. She died of [illegible] fever, had been ill for many weeks. Mr. [Merriam?] had just returned from Mexico and was also quite ill with fever. I hear that he is recovering slowly. Your old house on Main street does not look at all familiar, as there is a large United States flag, flying from the upper gallery. It is the headquarters of Col. Clarke.

Miss Sara it is so heart rending to see and hear of the condition of our large planters. I presume things are about in the same condition in Louisiana. Col. Waters has abandoned his place, having only eighty hands to do the work of three hundred. They have opened a large boarding house on the island, and are going to try and make a living in that way. He is certainly the most disheartened man that I have ever seen. Our country is ruined. There will never be another crop planted in Texas, the planters all say.

Rosa was still in Matamoras when we last heard, and are told by persons coming from there, that Mr. Gray's health is miserable. They are going into the mountains to spend the summer. I have been disappointed in not hearing from you. I hope every day that someone will come and bring me one of your sweet letters. Our family are all well. Pa's negroes are still on the farm at work, and have promised to stay this year out, when Pa says he will bid good bye to his place and farming. All join me in love to all. Henry sends a kiss, and says he [could?] write next time.