Letter from Pendleton Murrah to E. B. Nichols on Cotton Plan 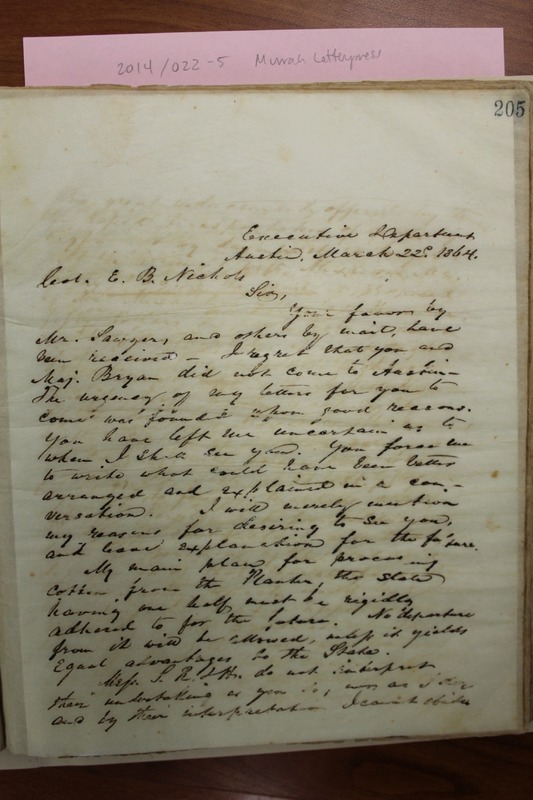 Letter from Pendleton Murrah to E. B. Nichols on Cotton Plan

Murrah writes to Nichol to explain his State Plan for purchasing cotton, stressing the need to harmonize with Confederate officials while also pursuing the state's own "liberal policy."

This item is believed to be in the public domain. No copyright in the item is asserted or implied by its publication here.

Your favor by Mr. Sawyer, and others by mail, have been received. I regret that you and Maj. Bryan did not come to Austin. The urgency of my letters for you to come was founded upon good reasons. You have left me uncertain as to when I shall see you. You force me to write what could have been better arranged and explained in a conversation. I will merely mention my reasons for desiring to see you, and leave explanation for the future.

My main plan for procuring octton from the Planter, the state having one half, must be rigidly adhered to for the future. No departure from it will be allowed, unless it yields equal advantages ot the State.

Messrs. S. R. & H. do not interpret their undertaking as you do, nor as I do and by their interpretation I cannot abide.

One great inducement offered by them in the rapid transportation of cotton by night and by day, exists no longer.

If the agreement with Alexander, McCarthy & Co., is the same as proposed by Mr. Alexander to me at Houston,--fifty dollars on each bale, not on one half--exported, it is all right. If it is not thus, it is not right. The contract [illegible] with Messrs Alexander through Judge [Crody?] is not right. All the cotton we desire can be obtained in that section of the state on my plan. This contract will poison that whole region. The State, if she ships from Eagle Pass to foreign markets, must ship for herself, not for individuals. This special contracting will break down the operations of the State, and deprive it of that moral force in the community which would be secured by a uniform plan, appealing especially to the producer. The Commissioner of the State will have enough to do to take charge of the cotton and manage the interests of the State. The 7 per ct. Bonds authorized by the Legislature, will be used in payment for cotton, and only when it has reached the point of delivery upon the Rio Grande, where the division between the state and the vendor takes place. It is useless to discuss the question of the 6 pr. ct. or the 7 pr. ct. Bonds, as quibblers may excite apprehensions and fears as to the 6 pr. ct. Bonds. The State and Confederate Authorities must harmonize in their action with reference to cotton. If they do not, the fault shall not be with me, nor with those acting under me, if I can prevent it. The State, when she has purchased a sufficient amount of cotton, must withdraw from the market. I wish to know, therefore, how much has been contracted for by the State, so as to see what she will realize upon it. We must not purchase too much cotton at one time. As our plan is put into operation, and bagging and rope introduced, we can procure all the cotton desired and as fast as it can be carried from the State.

Conciliation, and not factiousness, must be exhibited toward all those acting under Confederate authority, and the State will thus be enabled, in the midst of confusion and trouble, to execute her own liberal policy towards her citizens, her own public interests, and, at the same time, greatly assist the Confederacy.

There is confusion and dissatisfaction growing out of the tendency of the plan proposed by the State, in the manner in which it is being executed, to place too much in the hands of a few, and to create the appearance of speculation. This must be promptly arrested and broken up. You now, Colonel, can see the reasons of my great desire to see you. You will excuse the pointedness with which I have expressed myself; as it grows alone out of a sincere desire to execute the policy of the state, as to secure the greatest public benefit. In this, and all other things pertaining to my public conduct, I am determined to know nothing but the interests of my country, and the equal rights of her citizens.

Thus actuated, if I fail, I shall not be ashamed; unless it be for the want of wisdom and moral firmness, to carry out what I believe to be right.

When shall I see you?