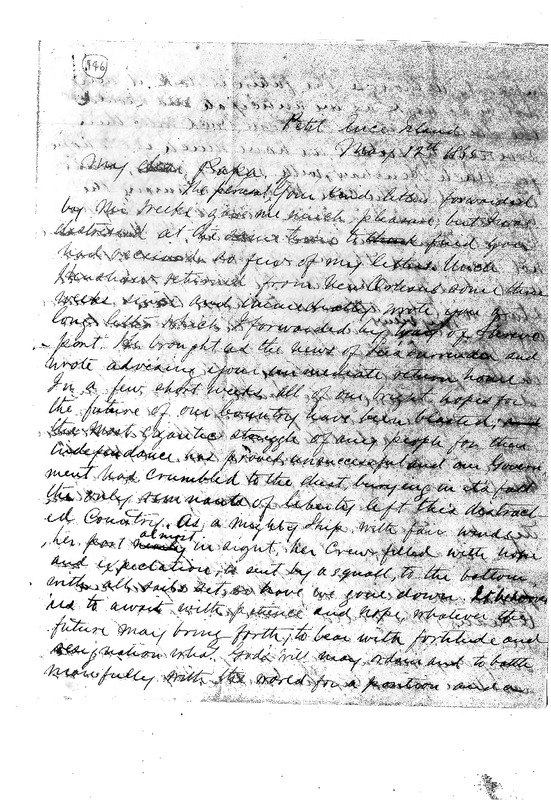 Dudley informs his father of Lee's surrender and laments the fall of the Confederacy. He regards Lincoln's assassination as a blow to the South. But he does see some hopeful prospects in the high demand for salt and he urges his father to send powder to help bring it to market.

This item is published solely for personal research and nonprofit educational use under the terms of fair use. No copyright in the item is asserted or implied by its publication here.

The perusal of your kind letter forwarded by Mr. Weeks gave me much pleasure, but I was distressed at the same time to find you had received so few of my letters. Uncle Henshaw returned from New Orleans some three weeks since and immediately wrote you a long letter which I forwarded by way of Shreveport. He brought us the news of Lee's surrender and wrote advising your immediate return home. In a few, short weeks all of our bright hopes for the future of our Country have been blasted: the most gigantic struggle of any people for their independence has proved unsuccessful and our Government has crumbled to the dust, burying in its fall the only remnants of liberty left this distracted country. As a mighty Ship with fair winds, her port almost in sight, her crew filled with hope and expectation, is sent by a squall, to the bottom, with all sails set, so have we gone down. It behooves us to await with patience and hope, whatever the future may bring forth, to bear with fortitude and resignation what God's will may ordain and to battle manfully with the world for a position, and a support. Although the future is dark, it may not be as dark as we anticipate and should the States be allowed to come back with their sovereignty intact, we have much yet to hope for. Uncle Henshaw, with many others, thinks this will be the case. He has been among the Yankees and his judgement is probably more correct than either yours or mine. The Yankees have not recognized the bogus government of Welles and it is probable that the whole people of the state will be allowed to choose their executive officer. My views in regar to the assassination of Lincoln are the same as yours. I think that in the present condition of the Country it is a misfortune to the South. Johnson seems to be a man void of principle and honor and if he is not restrained by the Conservative party at the North, he will out Herod, Herod. Next to our being subjugated I regard his being raised to supreme command our greatest calamity. I hope that dear Mama has returned ere this, if she has not, do you not think advisable for her to return by way of New Orleans. From Havannah she could to Mr Lacy in New Orleans, who would obtain her a pass to go to New Iberia. Ladies come through the lines every day without dificulty. The lines in parts have been opened by the Yankees. I hope however that Ma is now with you and that dear Sister's health was improved by the sea voyage. If you see no prospect of Ma's return to Houston, do you not think it better that you should come home at any rate? Everything here is progressing well under the circumstances as you could wish. If I had more mules at my command I could plant more corn, but at present this is impossible. Make every effort to get that powder here. There will be great demand for salt this summer. It is now selling for six dollars a sack in New Orleans. I deposited all the money I had on hand with Uncle Henshaw. Some think the State Money will be redeemed. This I consider rather doubtful. I endeavoured to sell it here, but was unsuccessful. I am much obliged to you for the flannel and cloth sent over in the trunk. The flannel will make me an excellent summer suit. The coton is unbleached and is too coarse I think for sheeting. Mr. Robinson brought me the axes a few days since. Old Labra has a fine garden and has planted most of the seed you sent over. Mrs. Richardson had previously been kind enough to give me a good many seed. I send you by Mr. Weeks a very handsome pipe that was cared for me by Young Randolph. Please accept it as a very slight token of the love I bear you. I shall look for you home very soon. We have had fish almost every day but I fear the back water from the Mississippi will spoil the fishing. The Grand Levee has broken. Fausse Point and the whole Lafourche Country is under water. The Bayou Teche has been very high since last January and is now almost over its Banks. Louise joins me in much love to Sisters Mary and Minnie, Brother and yourself.